Elegant vinegar with shades of pink. Its bright aromas with iodine notes are reminiscent of chamomile flowers. Its dry flavour lets graceful hints of herbs (such as absinthe, bay leaf, rosemary and thyme) shine through.

Its unique flavour, bursting with aromatic notes, makes it an ideal condiment for starters, fish, marinates and salads.

This vinegar is crafted according to a method invented in 1823 by German chemist Schützenbach. Unlike most commercial vinegars, it undergoes a long aging process. Ten times slower than usual industrial techniques, the Schützenbach method consists in exposing the alcohol to the air as much as possible by circulating the vinegar in various sections of a large tank. The greater contact area between air and alcohol intensifies the transformation of alcohol to vinegar by bacteria. This method allows the vinegar to better retain the flavours and aromas of the base wine, while also imparting a mellower taste.

Founded in 1908 by Augustin Badia, the company was originally dedicated to making and selling wine. It has changed a lot over five generations: still a family business operated by the Badias, it now specializes in making artisanal vinegars of the finest quality, combining over a century of experience with modern technology. 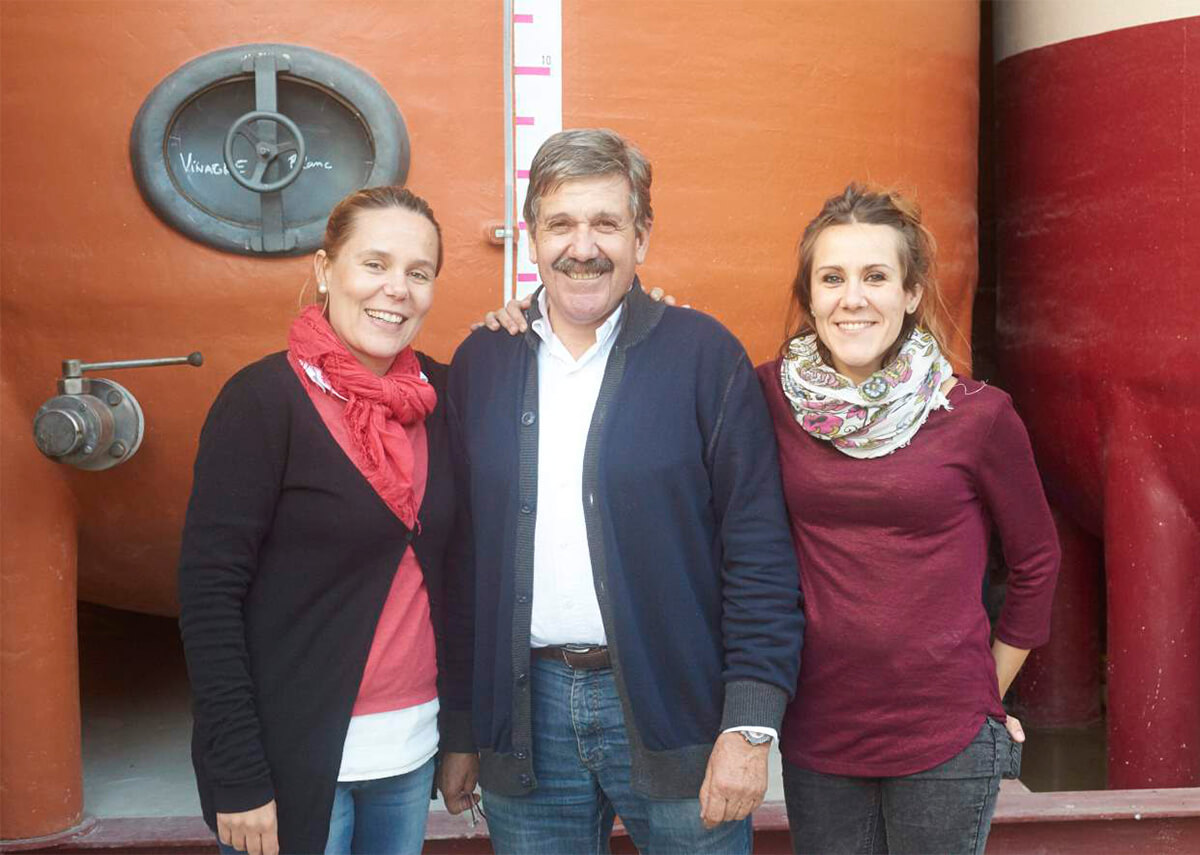 For over 100 years, vinegar has been the lifeblood of the Badia family

Founded in 1908 by Augustin Badia, the company has been in the family for five generations and underwent numerous changes. Originally dedicated to making and selling wine, the business is now focused on producing premium artisanal vinegars, combining its legacy of a century of experience with modern technology. Discover this unique company and its rich history.

Let us travel back in time to the early 20th century, in Catalonia. When Augustin Badia decides to launch his business, he does not suspect his winery will one day… turn to vinegar. The company only begins to produce artisanal vinegars many years later, in 1940, after Tomas Badia Vila, the second owner, decides to expand activities and widen the range of products. With the help of his three sons, Tomas Badia Vila develops ice creams, liqueurs, sodas and vermouths, in addition to making wines and vinegars.

Twenty years later, Agusti Badia Carrera, the third Badia to take over the business, decides to focus exclusively on the production of wine vinegars. The company then becomes the specialty vinegar maker it is today. In collaboration with Rovira I Virgili University, in the Catalan city of Tarragona, Agusti Badia begins to modernize the company’s processes and develops a new range of innovative vinegars, marketed under the name Castell de Gardeny. In 2006, his two daughters, Judit and Marta, join him to continue growing the family business. 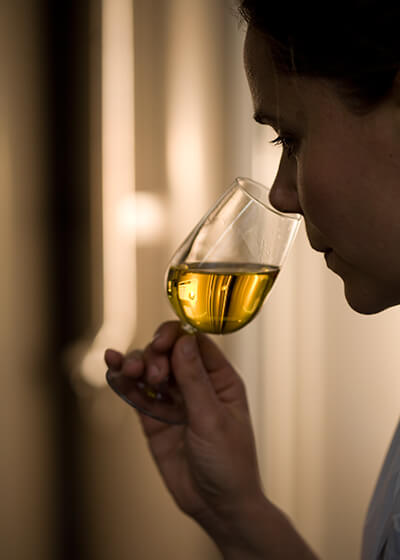 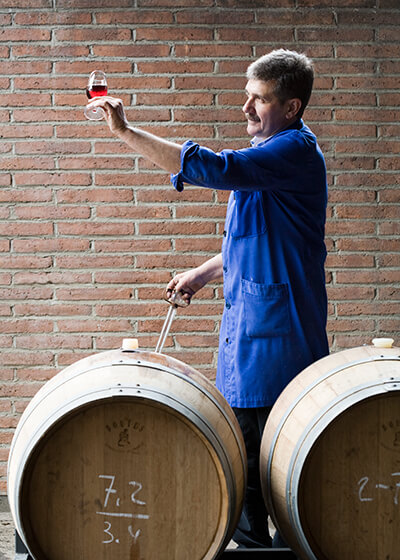 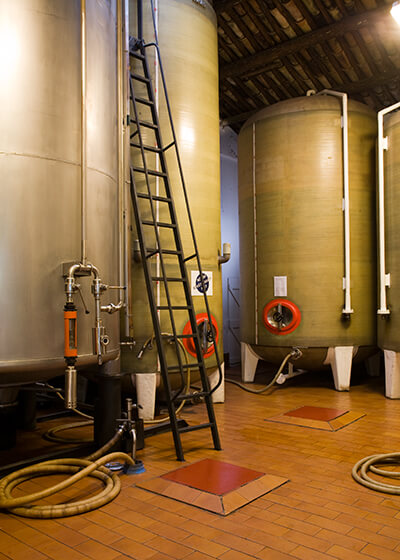 Judit and Marta’s arrival marks a turning point for the company, as their contribution allows for numerous innovations in product research and development. In turn, Badia expands its distribution network and promotes its products beyond Spain and across the ocean, finally entering our market.

Badia stands out from the competition thanks to its passionate artisans, each fully dedicated to the company’s success and to creating products of the highest quality. Badia believes that “good vinegar comes from good wine”, nothing surprising considering the legacy of its founder who envisioned a future in winemaking. Years later, the same principle still guides Agusti Badia and his daughters as they personally and carefully choose each variety of wine to transform into premium vinegars.

Indeed, during the fermentation process, only the alcohol in the wine turns to vinegar. Other aromas will remain… under one condition: patience is key, as a long and careful maturing process is essential to retain these flavours. 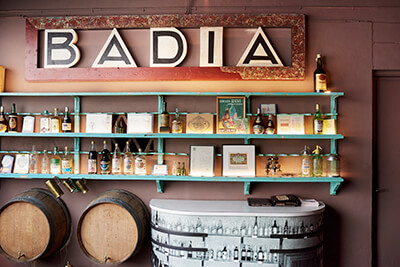 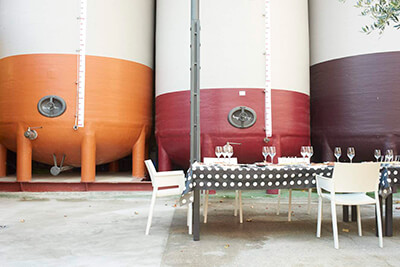 In order to preserve as much as possible the nuances and organoleptic properties of the wine, Badia privileges an aging method called Schützenbach, after the German chemist who developed it in 1823. This method consists in pouring the wine into a barrel comprising three horizontal sections. The top section holds the wine, which then trickles down through the middle section, filled with permeable matter (such as wood chips) providing a vast contact surface for acetic bacteria to take hold, and under which air can circulate freely. The wine undergoes natural chemical transformations and turns into vinegar, trickling down to the bottom section. This vinegar is then returned to the top of the barrel to follow the same path once again. The process achieves much richer and more complex flavours, but requires time and patience.

To make its bittersweet Merlot and Riesling vinegars, for instance, Badia even adds a further step, aging the vinegar in carefully selected French oak casks, so the aromas from the wood balance and enrich the flavours of the final product. This attention to the smallest details and respect for traditions have allowed the company to create a range of vinegars with exceptional flavours, continually adapting to new trends and to evolving expectations in the marketplace. That is why Badia diversifies its product offerings with different flavour profiles, formats, innovations and more.

The line of vinegars produced from different varieties of red wines is complemented by a second one made from white wines. Badia also offers box sets containing several vinegars in small formats, allowing consumers to try them before choosing a favourite and to sample the subtleties of the different aromas derived from the wine varieties used to make them. The Merlot vinegars, for instance, with their deep red colour and distinctive red fruit aromas, are perfect in vinaigrettes and in slightly tangy sauces and are also delicious served with fruit. There are hundreds of nuances offering a wide palette of gourmet possibilities.

For many years now, Badia has been producing, bottling, labelling and distributing its products with the same passion. For the Badias, running the business is more than a job: it is part of a mission to perpetuate the family heritage, passed down from generation to generation. Today, in the vinegar factory, the latest technology is found alongside century-old equipment that belonged to previous generations, sign of a harmonious partnership between modernity and tradition. While they embrace innovation, Judit and Marta want the company to pursue the commitment to quality started by their great-grandfather, Augustin Badia. They hope their children will also carry their passion for vinegar, so the ancestral factory remains a place for inspiration, good times, tasty food and get-togethers, as it has always been for the Badia family.